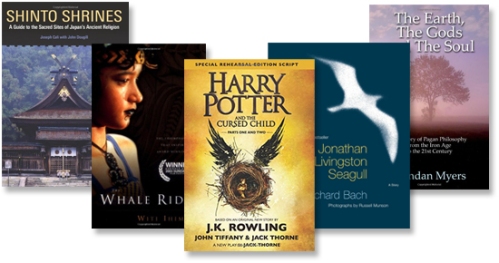 August is summer holiday time here in the UK so perhaps it’s no surprise that I’ve been relaxing and reading a lot of fiction recently, as you can see from this month’s reviews which include:

But which one have I awarded Read of the Month? Read on and find out!

Harry Potter and the …School of Witchcraft without Wiccans??

J.K. Rowling frequently treats fans to explanations and back-stories to the world of witchcraft she has created in Harry Potter through her official website Pottermore and her Twitter account. But last week she dropped a bit of a bombshell when she tweeted: “To everyone asking whether their religion/belief/non-belief system is represented at Hogwarts: the only people I never imagined there are Wiccans.”

As both a long-time fan of the Harry Potter series and as an Eclectic Pagan influenced by Wicca, I have a problem with this tweet. It seems utterly unnecessary to say such a thing that is inevitably going to make some of her Wiccan fans feel alienated. She later explained that Wiccan magic is somehow not compatible with the magic of Hogwarts, but this has a rather hollow ring. There are plenty of other religions that have magical elements to them (including Judaism, which J.K. Rowling categorically stated is represented in the student body of Hogwarts), and much of the magic in Harry Potter is clearly inspired by Wicca and related living witchcraft.

This tweet is also very dismissive when bearing in mind how loyal Rowling’s Wiccan fanbase has been. Let’s not forget that she came under a lot of fire from conservative Christians for writing children’s books featuring witchcraft. Many Wiccans, on the other hand, love her series (I even featured Harry Potter in my list of top 10 Wiccan movies for children!), and I know from personal experience that she inspired a generation of young people to gain a serious interest in magic and witchcraft. It therefore strikes me as insensitive, if not downright mean-spirited, to say that Wiccans are not represented among the students of Hogwarts.

Finally, I find it very sad that J.K. Rowling has been so quick to exclude Wiccans from her world when she has famously stood up for marginalised communities in her writing. Even when it meant incurring the wrath of those who disagreed with her, she has given a voice to the LGBT community, immigrants, victims of abuse, the disabled, the impoverished, and even criminals. Why, therefore, has she stated that Wiccans don’t belong at Hogwarts? Wiccans and other practitioners of witchcraft have faced persecution for hundreds of years now, and even today a great number feel the need to conceal their religion from others out of fear of misunderstanding and discrimination. It feels like being kicked when you’re already down when the famous champion of victimised minority groups doesn’t make you feel welcome!

The only reason I can think of for J.K. Rowling to say such a thing is to be “ironic,” without really thinking through how it might make her Wiccan fans feel, or because she lacks an understanding of what Wicca really is – does she somehow think that Wiccans wouldn’t want to be at Hogwarts for religious reasons? Because in my experience that’s not the case at all.

So let me be clear now – J.K. Rowling, you do have many Wiccan fans who have taken a lot of pleasure and comfort in your representation of a world where magic has a place, and many of them have been left puzzled and saddened by your throw-away comment on the lack of Wiccans at Hogwarts. Please think more carefully about how your words may make your fans feel in the future.

As a continuation of my list of Top 10 Pagan-friendly family movies, here’s another top 10 list of family movies that Wiccans might find appealing. The main difference between this and the previous list is that, while the movies on the first list had more earth-based and environmental themes, these ones deal more with magic and witchcraft. Although you’ll probably find many items on both lists interchangeable.  END_OF_DOCUMENT_TOKEN_TO_BE_REPLACED

Reflections on “The Magicians,” Lev Grossman

As I’ve already reviewed one fiction book of Pagan interest, I thought it wouldn’t be a bad idea to review another fiction book that might be of interest to those who work with magic – The Magicians by Lev Grossman. [You can find the rest of this review here]